skip to main | skip to sidebar

More descriptive, and with a couple of pictures thrown in.... definitely worth the read.

afrikavocado.wordpress.com
Posted by Donna Dallal-Ferne, LMFT at 4:23 PM No comments:

Dakar, and then Home!

We got home at about 3:00AM on Tuesday, just yesterday that is! To conclude the rest of what we did: As predicted we ate good Palestinian family cooking, and were entertained by the family for the duration of the last 2-3 days in Amman. Then, on the evening of the 17th we flew to Dakar, Senegal, arriving on Wednesday afternoon, the 18th, meeting up with Justine (older daughter), who flew into Dakar from Bamako, Mali, arriving about 30 minutes after we did.

Justine served as our tour guide in Dakar, and thank goodness, because her French is basically fluent, and if you do not speak French or the native Wolof, you will mostly not be understood. Dakar was my first Africa experience, and it was quite an eye opener. I have traveled in the Middle East a handful of times in my life, both as a child and as an adult, so I am not unfamiliar with what it means to stand out and look like an American tourist, or what it is like to speak to someone who speaks broken English, and then feel stupid for expecting the native of another country to understand my imperialist language, or what it means to go to an open air market, and have the vendors pester you until you pay attention to them, and hassle over the price until you feel both ripped off, and again like an ugly American for not just letting them get the excessive price they were asking for….. After all as a basically middle class American, I have far more privilege and access than the average flea market (“Souk” in the Middle East) vendors; their goods, even at a somewhat inflated price, are still lots cheaper than I could get them for in the States, and so what if I overpay. I am visiting briefly, and if I can boost their economy even just a tiny bit, maybe that is a good thing; my small tourists gifts at inflated prices are not going to break my bank. Excess baggage fees are much more likely to do that, and you won’t see me, or anyone else, haggling over those! All of these experiences that I have had many times before were true again in Africa, the difference being that it was all many times more intense.

Instead of being only mostly obvious as an American tourist, and sometimes being able to blend in because I basically look like an Arab, until I don’t dress or speak like an Arab; in Senegal we stuck out like sore thumbs. Instead of being able to count on someone speaking the Western language that I speak, I had to either fumble with 30+ years old bad high school French, or hope that they might speak better English than my bad French, or (what was usually the case) count on Justine to translate or just speak for us. Instead of the vendors being a little pushy, they were persistent in a way that you cannot even imagine. As we were walking along the street at any given time, someone who has something to sell, which seemed to be almost everyone, would begin to walk next to us, and then speak to us, telling us that they had something for a good price, and would hold whatever it is that they are selling in front of our path, making it very difficult to ignore them. If you were to try to ignore them, they keep speaking, and walking along side or in front of you. If you continue to ignore them, they might try speaking to you in English (generally they would try French first); they might go back and forth between their good French, and broken English. If you begin to speak to them to tell them you are not interested, they then know that they have your attention, and have won round one. Now they begin to tell you that what ever it is they are selling is beautiful, is a good price, etc. Please come to my shop. Over and over, I was truly impressed. Despite themselves, the street vendors, as unrelenting and pushy as they were, were generally very friendly and likeable, making it that much harder to ignore them.

There is more to Dakar, however, than just pushy street vendors. Again, as we did everywhere on this trip, we ate very well, including a meal offered at the home of Justine’s Senegalese family from her college study abroad experience. We took in some historical sites, found our way to 3 different beeches, and to the open market (as opposed the random street vendors, sprinkled throughout the streets), and enjoyed breathing in the colors of Senegal. Indeed the colors of Senegal are truly spectacular. I bought a post card or two that showed off the colors, but it was not difficult to take a picture at any given moment and create a spontaneous post card. Wherever we went where there might have been a crowd of people, the show of color was always bright, vibrant, and truly beautiful. The cloth that is used for clothing for anyone, anytime, dressing up or not, is always vibrant, bold, and colorful. Senegal was truly breathtaking. We took in the tiniest taste of a tiny slice of this very grand continent. I hope to be blessed with more African adventures before I get too old to want to deal anymore with airports and airlines!

Posted by Donna Dallal-Ferne, LMFT at 5:53 PM No comments:

Had a beautiful three days in Turkey with Ruth, especially because the sun decided to come out in time for her portion of my stay.

We are now in Jordan. Arrived in Amman Monday evening, and we are now deeply appreciating the hospitality of the family. It is a true luxury to be fed, housed and toured by family who live here and can offer a very significant safety net. We are in Aqaba today, a beautiful port city in the very southern tip of Jordan on the Red Sea. A full day of sun and salt water today, and tomorrow we will drive to Wadi Rum.

Wadi Rum is a section of desert in Jordan surrounded by rocky mountains, a favorite destination for nature lovers and geologists! The last couple of days in Jordan will be spent being entertained and dined in the homes of several different family members. A very serious treat to indulge in the family cooking and generosity. It is a dining experience that is truly not to be matched anywhere. 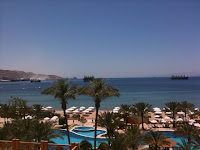 Our hotel in Aqaba.

Posted by Donna Dallal-Ferne, LMFT at 9:04 AM No comments:

Well, I never got to the blue mosque yesterday, but discovered that it is literally about a 5 minute walk from my hotel. So, as I strolled in the rain in the direction of the Blue Mosque, I discovered crowds of tourist looking people getting in line, and a sign for "Basilica Cistern", so I stood in line, slightly protected from the rain, then headed inside to see this most unusual underground Basilica. Dark, damp, water, and beautiful columns. Lonely Planet tells that it was built by Justinian in 532. The feature to find in this underground relic are the carved heads of Medusa at the bottom of a couple of columns in one of the back corners of the cistern. Found them, read an interesting story about the myth of Medusa, and enjoyed seeing her carved head once upside down (my favorite!) and once sideways.
After the dark and damp of the cistern, I emerged, and stepped into the, too much like Syracuse damp of the outdoors, and promptly found a vendor who could sell me an umbrella. I continue my walk towards the Blue Mosque, and quickly make my first, and hopefully my last, single American woman traveling alone mistake. A man approaches me and begins to speak to me in broken English; I hesitantly reply, but don't shoo him off. Before all is said and done he has my first name, tells me the Blue Mosque is closed for prayers, and escorts me to the head of the line for the Aya Sophia museum, then tells me that maybe he will see me again, and leaves as I head into Aya Sophia. I think to myself, thankfully he's gone, and what is the likelihood of seeing this guy again??
I enter Aya Sophia, and literally spend a couple of hours drinking in the awe and beauty of the place. The ancient sacred art of Islam juxtaposed with Christian art offers an honest perspective on the history of peoples who share a common beginning. The holy building is grand with a very high domed ceiling with all kinds of beautiful mosaic. The walls, columns, and flooring are all marble. As I walk, I both crane my head to see what is above in the ceiling art, and I look down and sideways marveling at the sheer volume of incredibly beautiful marble. I enjoy playing with my camera, wondering if I will be able to capture the magnificence with my cameras eye. As I emerge from this "museum"/holy building, I realize that the sun has come out, and I have a skype text from Justine! At which point, I find a park bench and sit in the sun and chat from my iPhone in Istanbul with my daughter in Bamako, Mali, about my son who was in Syria, and who has now landed safely with family in Amman, Jordan! The wonders of technology!!
I then begin to head back to my hotel and low and behold creepy guy calls out to me, "Donna! Would you like to come into my shop?" At which point I do shoo the guy off. He is obviously agitated, tells me that I have "broken his heart" and says some awful thing about what will happen when I die. Like I say, inshah'allah (look it up in Wikipedia) I will not see this guy again, and lesson learned.
Off to the Grand Bazar, or possibly Istiklal Jedeci today, and Blue Mosque probably tomorrow.
Donna
Posted by Donna Dallal-Ferne, LMFT at 2:00 PM No comments:

Yesterday I arrived in Istanbul after an unexpected hiccup at the outset of my trip. I had purchased a ticket that would allow me to visit my son who has been studying Arabic in Aleppo, Syria since October, flying through Istanbul. Because he is leaving Syria early, due to recent events of the "Arab Spring", and there is no getting a refund on my ticket, I decided to take the first leg of my trip and vacation for a few days in Istanbul.

As I arrived in the Syracuse airport for my departure, I discovered that just getting off of an already existing itinerary without continuing to ones stated destination is much more complicated than I anticipated. My initiating flight had mechanical difficulties as well grounding me in the Syracuse airport the night I was supposed to be making my trans-Atlantic flight!

All that initial nonsense resolved itself, and I arrived yesterday afternoon in Istanbul, tired, but ready to begin my vacation. I enjoyed a lovely Turkish meal last night. Today I am hoping to get to the Blue Mosque, in between raindrops, and then to a Turkish bath!

Donna
Posted by Donna Dallal-Ferne, LMFT at 10:07 AM No comments:

This page is being offered as a forum to any and all who are interested in conversing, about therapy, yoga, massage, and other modalites as well. Send me your questions, comments, any topics you are interested in having addressed, and let's talk!!